Iconic mayfly populations have declined by as much as 84 percent

The emergence of Hexagenia limbata mayflies, throughout the Great Lakes and parts of the mid-Atlantic region, is nearly a religious event in angling circles. Each year in early June, these enormous mayflies blanket the landscape, emerging by the billions each night, smothering waterways, riverbanks, roadways and more with thousands of tons of trout-candy biomass. Not long ago, these historic and essential emergences were almost wiped out. By 1970, Hexagenia were gone from large swaths of the Midwest. Vast sections of the Mississippi, Illinois and Ohio rivers lacked the storied mayflies and the entire Western Lake Erie Hexagenia population was completely extirpated.

Following the introduction of the Clean Water Act in 1972 and two decades of targeted conservation and restoration efforts, Hexagenia populations began to rebound. Hex from populations that persisted recolonized formerly Hex-rich waterways. By the 1990s, the historic, suffocating emergences of Hexagenia had returned. Unfortunately, according to a new study, Hex are once again suffering a precipitous decline. The study, recently published in the journal PNAS, analyzed radar observations of mayfly emergences to quantify long-term changes in annual biomass transport along the Upper Mississippi River and Western Lake Erie Basin. According to the study’s results, populations have declined dramatically from their recovered levels in the late 1990s and early 2000s.

The study’s findings indicate a staggering 84% decline in Lake Erie Hexagenia abundance between 2015 and 2019. Though not as severe, sharp declines are also evident in Mississippi River populations, where results indicate a decrease of 52% from 2012 to 2019. Overall, the results “suggest a widespread and multi-year decline in the populations of mayflies in the American Midwest.”

The authors highlighted both the baseline and amplifying affects of pesticide contamination of waterways, especially that of neonicotinoids, noting that "Neonicotinoid concentrations in Great Lake tributaries can be up to 40 times greater than the Chronic Concentration set by US Environmental Protection Agency Aquatic Life Benchmark." Hex nymphs are doubly exposed to these pesticides—exposure to which results in greater susceptibility to hypoxia, reduced fitness, and increased predation—as they are present both in dissolved water and in stream and riverbed sediments, where Hex and other Ephemeridae nymphs burrow.

“If these population trends continue,” the study warns, “persistent environmental changes could threaten to once more extirpate Hexagenia mayflies from North America’s largest waterways, making this ephemeral spectacle—and its vital ecological functions—a thing of the past.” 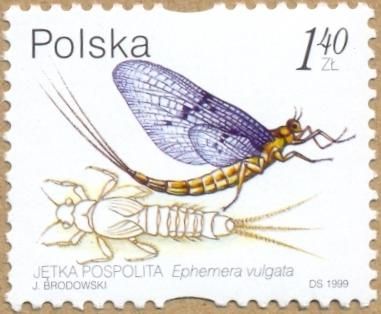