To whom it may concern,

We would like to offer some comments on the regulatory endpoints that are proposed in the first Preliminary Pollinator Assessment to Support the Registration Review of Imidacloprid (January 4th, 2016).

Below is a figure from our paper (Rondeau et al. 2014), with the toxicity endpoints and the colony-level feeding exposure endpoint shown along with our summary of time dependent toxicity data for imidacloprid.
Indeed, the EPA has chosen the 10-day LOAEC and 48-h LD50 to be safely on the low side of most of the reported results in the literature. However, we feel that the colony level exposure of 25µg/L as determined from the Tier 2 study results should be viewed with much caution. The recommendation of <25µLa.i./L is shown as the red vertical line on the plot. Nectar consumed at 25µLa.i./L with typical daily consumption of 20µL/day yields a daily dose of 0.5ng a.i. per individual. A single day’s exposure, 0.5ng/bee, exceeds by a factor of 2 EPA’s accepted LOAEC of 0.24ng/bee. It is very hard to imagine that the cumulative dose to individual bees at this level of contamination would not give rise to neuro-toxic symptoms.

Curiously, the 25µLa.i./L exposure rate corresponds on our graph to the LT50 time of about 20 days, roughly the age when nurse workers enter the field foraging force. With the colony getting much of its nourishment from the contaminated nectar, there may be little need for a robust work force aged much more than that. Clearly the colony is providing services that transcend the health of individual bees. In fact, it can be expected that there may be colony-wide paradoxical effects. The colony response to a shorter lifespan of individual bees could very well be acceleration of brood production. If colony health was measured by the amount of capped brood, such a seemingly positive effect would be interpreted incorrectly.

In our study we found that the results from many diverse toxicity studies for imidacloprid on insects could be understood in terms of a simple power law scaling,

Where D is the dose rate, t is time and P is the power law exponent. We discovered that much of the honeybee toxicity experiments can be unified with such a scaling law where the time exponent is approximately 2.

Although there is an abundance of toxicity data for imidacloprid and honeybees, there is still missing a good study that can determine the time when such t2 scaling is likely to come to an end. Absent such a study, the prudent policy is to assume that the scaling we present continues indefinitely until individual bees die. If you use bees as proxies for solitary pollinators and other beneficial insects, then you are left without the benefit of robust colony services to maintain health in the presence of pesticide residue. Instead the best estimate we would have would be individual toxicity scaling, with a maximum time based upon natural insect lifetimes or reproductive cycles. This will vary dramatically from species to species, and could approach good fractions of a year for insects on an annual cycle. Unfortunately, the regulatory process is not as simple as assigning a threshold guideline concentration for which to stay below, since the organism life span becomes part of the equation.

The EPA’s continued adherence to the concept of threshold toxicity levels should be questioned with pesticides like imidacloprid that are designed to bind strongly to synaptic receptors and which act to directly stimulate the post synaptic junction. Relatively few molecules of the pesticide can have long lasting effects, as we demonstrated with a model in our paper. This is in contrast to acetylcholine esterase inhibitors, where the action of a just few molecules does almost nothing, since there would still be many acetylcholine esterase sites to clear the junction of neurotransmitter. Hence, for this latter class of chemicals (organophosphates), there is a natural threshold built into the toxic effect, namely the point where concentration of pesticide is sufficient to inhibit a large fraction of the acetylcholine esterase sites.

EPA’s history of successful regulation of the organophosphate insecticide can be seen as a vindication of the threshold theory for the acetylcholine esterase inhibitors. The neonicotinoids present the EPA with a major change in mode of action. Hence a fundamental change in the regulatory framework that backs away from the threshold concept and looks more deeply at the accumulation and persistence of toxic effects is required (Sánchez-Bayo & Tennekes 2015). 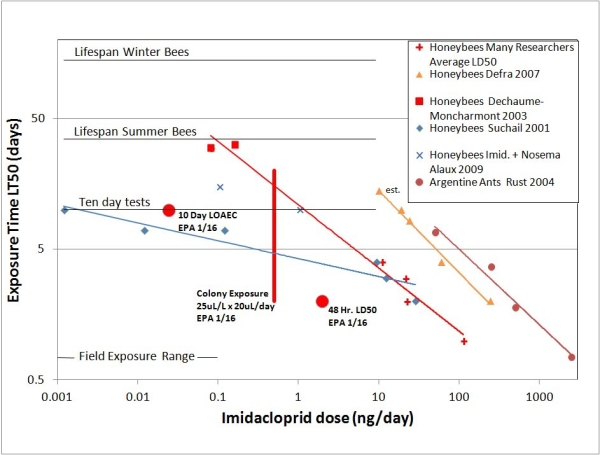