Iowa's oak trees are sick, and some say farm chemicals are to blame

Iowa’s state tree is under stress. Visible damage to oak trees in recent years may be caused by farm chemicals, forestry experts say. Nearly a thousand Iowans have contacted the Iowa Department of Natural Resources this spring after noticing the leaves on their oaks appear to be eaten by insects nearly down to the veins, a problem exacerbated this year because of weather fluctuations. The good news: the trouble isn't with insects. The bad news: There's not much you can do about it, unless herbicide applied to corn and soybean fields is stopped, according to a DNR district forester. “If that chemical was not there, this wouldn’t happen, if you believe the research,” said Mark Vitosh, who is based in Johnson County.

Officials with Monsanto, which makes chloroacetanilide herbicide products cited in studies, said they haven't received any complaints and weren't immediately familiar with research on it, so could not comment. Iowa Farm Bureau officials had no comment. University of Illinois research in 2004 found a “strong correlation” between a condition called leaf tatters and exposure to chloroacetanilide herbicides, particularly in white oaks.

A 2008 study in Iowa by the DNR and Iowa State forestry experts reported that 11 million pounds of acetochlor and metolachlor (both in the chloroacetamide group of herbicides) was applied in Iowa in 2005 and showed similar correlations to oak leaf tatters. Tivon Feeley, forest health program leader with the DNR, said he is seeing a lot of oak tatters this year because a warm February and a very cold March slowed oak leaf development. The leaves emerged at the same time when the chemicals were at peak ambient levels.

The number of citizen complaints this year is higher than prior years, he said, though not at a record level.

The Iowa DNR reports the problem of oak tatters yearly to the U.S. Department of Agriculture Forest Service, which monitors issues with tree health. Officials there say they hear more reports from Iowa than other Midwest states. The USDA Forest Service lists herbicides as one cause of oak leaf tatters, along with low-temperature injury and insects. Its website specifies that little can be done to prevent additional damage, except to reduce other stresses on the tree and keep it in good health.

Here’s how the damage occurs, according to forestry researchers: When oak leaves emerge in spring, the leaves begin to curl up. Within days, the tissue begins to disappear. The condition correlates with how much chloroacetanilide is in the air. It’s not simply drifting from the applications on fields, but also exists in the atmosphere in areas not adjacent to crop fields, even in cities and towns where tatters have been spotted on trees. “Then rains can bring it down and, sure enough, you see tatters,” Feeley said. He said it is not caused from errors in application by farmers.

Leaf tatters most often appear in white oaks, which also include bur and swamp white, and others of Iowa’s 13 oak species. Hackberry trees can also be affected. Feeley said Illinois, Indiana, and Nebraska are seeing similar issues with tatters this year, and parts of Missouri and Minnesota.

White oak leaves from the trees on Don Kruse's acreage in rural Oxford which show the effects of oak leaf tatters. A tree can die if the leaves are damaged over years, but tatters may not be listed as the cause, Vitosh said. Growing secondary leaves to survive takes energy needed as defense against insects or disease. “In Iowa, we have a significant decline in white oak in the last five, six years,” he said, although he was unable to provide specific numbers. “I’m not saying it’s because of tatters, but that could be part of the problem.”

Don Kruse of rural Oxford says oak tatters are visible in the trees on his 40 acres every year. His property is adjacent to farm fields growing corn and soybeans. “Everyone tries to slough it off as insect damage and has nothing to do with the herbicide,” he said. “I’ve been a plant enthusiast for 40 years. I know, after farmers spray chemicals, within days, the growth of a variety of trees and shrubs is stagnant, and as the days progress, you see the damage on the oak leaves. 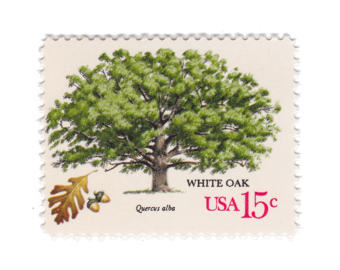