To save the birds, look to the fish

Birds that dive for fish while wintering in the Salish Sea, located between British Columbia and Washington, are more likely to be in decline than nondiving birds with less specialized diets, according to a study led by the School of Veterinary Medicine at the University of California, Davis. Diving birds were 11 times more likely to be in decline than nondiving birds, according to the study, published in the journal Conservation Biology. Also, populations of diving birds that rely on forage fish, such as Pacific herring, are 16 times more likely to decline than those with more varied diets. The study lends credence to what scientists have long suspected: “If you want to recover birds, you need to recover the food that they’re eating,” said co-author Joe Gaydos, a UC Davis wildlife veterinarian and director of the SeaDoc Society, a program of the UC Davis Karen C. Drayer Wildlife Health Center. “This could help puffins (Fratercula arctica), western grebes (Aechmophorus occidentalis), common murres (Uria aalge) and other diving species recover.”

Wildlife agencies from the U.S. and Canada have separately monitored wintering marine birds in the Salish Sea. Yet birds living there do not recognize its borders. So UC Davis Wildlife Health Center scientists combined 17 years of wintering bird data from both Washington and British Columbia, as well as Audubon Christmas Bird Counts, to develop a risk assessment for the birds and better understand what is driving declines across the entire region.

“For example, from looking at years of public health trends we know that humans can have certain behaviors that make them more likely to develop adult diabetes,” said lead author Ignacio Vilchis, a postdoctoral research fellow with the UC Davis Wildlife Health Center at the time of the study and now a research scientist at Scripps Institution of Oceanography. “You can interpret wildlife trends similarly, except that habits that place certain wildlife species at risk of decline are the result of much longer time pressures, like natural selection and evolution. So it becomes clear that environmental changes are the actual threat. We therefore think the smoking gun here is that there must be less forage fish available in the Salish Sea for diving birds.”

The researchers found 148 bird species that frequent the Salish Sea during winter. Of those, 39 were considered the core wintering marine bird community. The scientists separated the birds into two groups: those experiencing declining populations and those that were not. They then looked for shared risk factors and found that diving and diet were the main ecological traits driving the decline.

The study concludes that a combination of reasons is probably making diving birds more at risk of declines — they get entangled in fishing gear, are more vulnerable to oil spills, and require more calories than most nondiving birds. But the researchers propose that long-term changes in the availability of forage fish are pushing the declines. Half of all Pacific herring stocks in Puget Sound are low, as are herring stocks throughout the Salish Sea. Pacific herring and other forage fish, like surf smelt and Pacific sand lance that spawn in coastal habitats may also be negatively affected by changes in Puget Sound, where 93 percent of the coastline has been altered by dredging, seawalls and removal of vegetation.

“Now that we have a much better idea what is going on, we can hopefully address it,” Vilchis said. 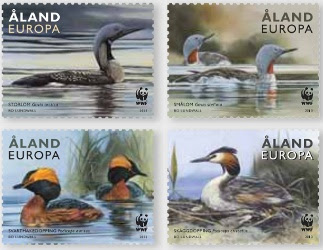